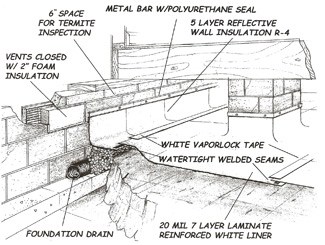 The debate in the building science engineering community over vented or closed crawl space has gone on for more than twenty years. The widely accepted, definitive study by Advanced Energy (advancedenergy.org), was started early 2001 with the final report published June 22, 2005.

This field study was financed by the U.S. Department of Energy and clearly shows that homes in the southeastern United States will benefit in several important areas. This can be achieved by controlling rain water intrusion, closing foundation vents, sealing the earth (or concrete) crawl space floors, insulating exterior foundation walls, dehumidifying the closed crawl space area and providing make up air, if needed. The last two items on the list, dehumidification and make-up air are critical to the success of a closed crawl space. And the last item is life threatening if not done correctly! If not installed properly, a closed crawl space will destroy your home!

The observations made in this study have led to changes in the North Carolina building code as well as attitudes (including mine) toward closing the crawl space. Trotter Company’s installations have confirmed dramatic improvements in relative humidity level, wood moisture content, heating and cooling cost. Advanced Energy’s Cyrus Dastur continues the study of closed crawl spaces with a study to be released in late 2008 or early 2009 where closed crawl spaces are studied in diverse areas of the country.

Get a Quick Quote Now! 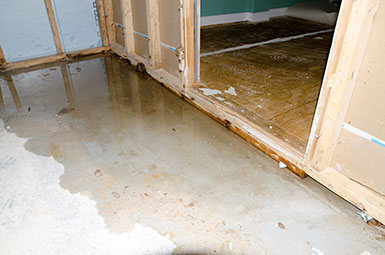 Your damp or wet basement can cause more than just a headache; these issues can create bigger problems like mold, mildew, rot, structural damage, and a variety of health problems. If you’ve noticed any of the symptoms below, you might have a serious basement waterproofing problem.

If water is collecting in flat areas or the soil is staying saturated in some spots, it may be surface depressions causing the problem. These depressions allow water to puddle, creating a mess. A swale could be helpful, or certain portions could be filled in and graded so that the water drains out of the low spot and away from the home. If this doesn’t work, an underground catch basin or drain may be necessary. If you notice that your lawn is muddy in one spot and dry in the next, it could be the type of soil that is causing drainage problems. There are three basic soil types: sand, silt and clay. If your soil is heavy in clay, it won’t drain very well. If it’s sandy, it will let water slip right through. If it is sandy right against your home, the water will run down the sides of your foundation causing wet areas in the walls to your basement. The best trick is to dig a small hole, fill it with water and watch how it drains. If it takes 12-24 hours to drain, you have a problem. (It should only take about 4 hours.) Improve your soil with a coarse aggregate like sand or pea gravel and organic matter.